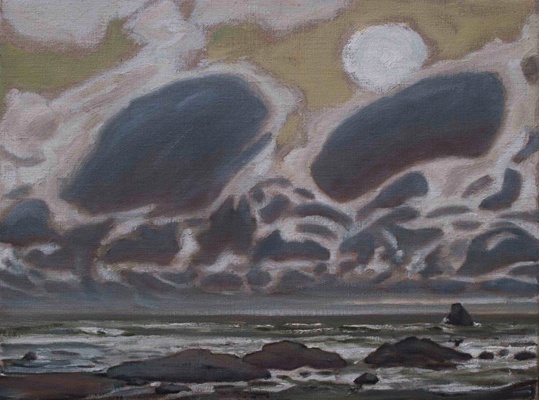 In college, I painted quite a few landscapes. We went outside every day, rain or shine, and painted the hills and trees of our rural campus. I got pretty good at it; I even sold a few, but nothing transcendental. After the second semester, my professor told me what I already knew: that they were nice, but not as powerful as some of my other work. She said that maybe one day, I’d come back to them when I had something as important to say as I did when I made my sketchbooks.

Weather and landscape continue to intrigue me, but I’ve rarely felt moved to record them in paintings. (Exceptions have been Italy and Arizona, but there I didn’t really try to recreate landscapes, so much as use the natural color schemes as inspiration in other artworks).

But, moving to Seattle from New York City has made me more aware of the landscape and weather again. We’ve gone from a relatively small window overlooking a few trees in a courtyard to nearly panoramic views of trees, sky, and water. I can watch the clouds take shape, the sun set, and the storms blow in. Watching so much weather unfold in front of me has been powerful. I feel small, and humble. I watch the sea birds dip and fall on the whitecaps. I love the striping patterns of the waves, the rippling caused by the large rocks, and the infrequent times when the light and surf are just right, and I can look straight down through green-tinged water and see the bottom of the Sound clear as a bell.

It’s so dramatic that if I tried to paint some of the colors and shapes I’ve seen, like the magenta clouds at sunset, no one would believe it. But I’ve been thinking about making some landscape paintings. It’s there and it’s on my mind.

Recently, I saw some landscape paintings by Thomas Wood at Lisa Harris Gallery, that came close to what I’ve been feeling about the landscape here in the Pacific Northwest. While they are all painted en plein air, they seem part real and part fantastical. They could have been part of a dream, or just as easily have come to life out of Salish folklore. Stars ripple and echo in the mauve night sky, while clouds fit together like tectonic plates.

I still don’t know what I want to say about the landscape here, but looking at Thomas Wood’s work makes me think again about trying.