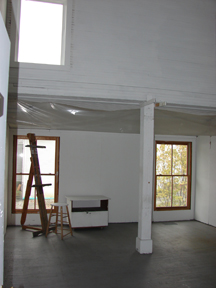 Welcome to another installment of the Vermont Studio Center Chronicles.

My first day was cold and rainy, so I’ve stuck pretty close to home so far. Let me show you around my house and studio:

They are very central not only to each other, but also to the main campus building (called the Red Mill). Those three buildings essentially form a triangle, and you can walk around all three in about three minutes. It’s fantastic to have no commute! (It reminds of New Bedford, where my apartment was just a short walk from school).

The rumors about no cell phone service are for the most part true, at least for my provider (Verizon, which has lesser coverage here than some others). I’ve found one three-foot radius in the gravel parking lot outside of the Red Mill where I have service, but even there, my call was dropped. I don’t mind this so much, since I’m not one to talk on the phone, but it’s been making it difficult to arrange a drop-off with the carpenter who has been constructing wood panels for me.

A pleasant surprise is more internet connectivity than they originally promised; the studios are now set up for wireless. My studio is huge and full of space and light! That’s where I’ve set up my little blogging operation.

My area of the building used to be a town gym in the 1920’s, with bowling lanes in the basement. There are several different parts to the building since it was originally three different buildings (besides the gym, there were the town offices, and then the town garage in the back). They’ve all been renovated over the years into one structure, albeit with different wings and twists and turns. 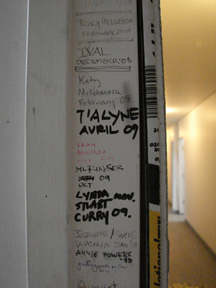 Studio door jamb with names of past residents

There are always interesting things to look at in a studio. Here’s the Life Drawing room, where anyone can come to draw a live model. 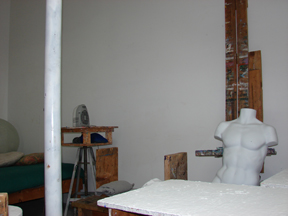 My house is part hunting lodge, part frat house, and part Grandma’s. Those of you who know me will know that I find that eclectic mix to be absolutely charming! I have my own room but share a bathroom on my floor. (I may do a post on just the bathroom; there’s a lot to see in there). There is a kitchen, but since meals are provided in the cafeteria over at the Red Mill, I don’t think we’ll be using it much. 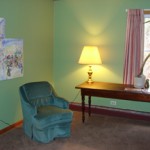 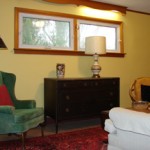 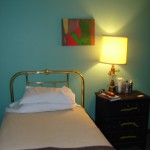 My bedroom is much bigger than I’m used to in NYC. The wall colors are two different shades of green. I wonder if someone ran out of paint, or bought the wrong color…they are two interesting choices to accent each other, so I’m not sure if that was the intention. The bright green is close to that on a house down the street from my aunt, Sheila, in Pittsfield, Massachusetts; whenever we drove by, especially in the winter against the snow, it almost hurt your eyes to look at it. Now that I think about it, it hurt in the summer too, because then the trees and grass were also a bright, but completely different, shade of green. I guess it was hard for the rods and cones to process all that competing greenery! It’s weird but I like it. 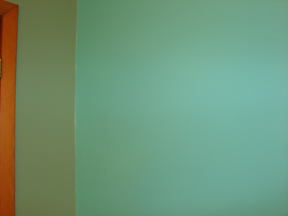 The colors of my room

There are nice touches, like lots of artwork, either donated or left behind by past residents, on the walls of the house. There’s more heat than I was expecting (in both living and work spaces) but I wouldn’t call it toasty. My New England blood is OK with this, but a sweater and layers are pretty essential.

And now, back to work in the studio! I think I may have finished my first painting last night. 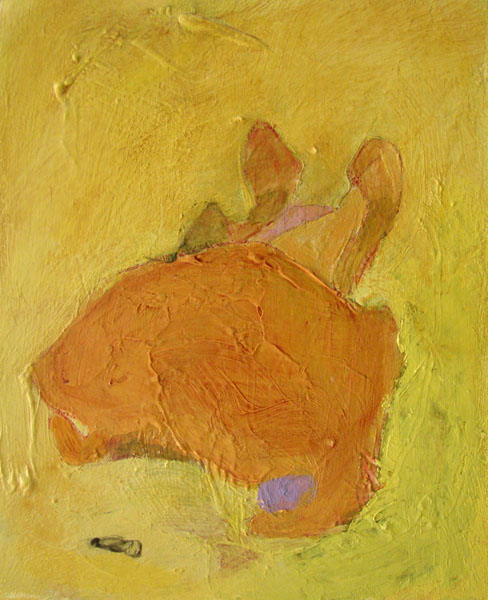