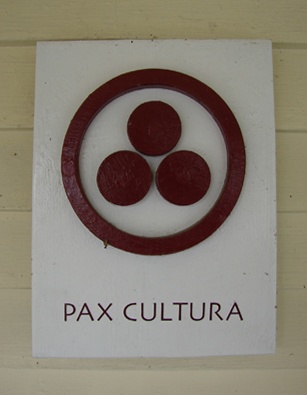 The day after the terrorist attacks, a sign appeared in Johnson, VT: “YOU CAN RUN BUT YOU CAN’T HIDE.  VENGEANCE IS MINE SAYETH THE LORD”.

As a response, Vermont Studio Center co-founder Louise von Wiese began putting “Art Is Peace” and Pax Cultura signs around campus. They are present at the entrance of most campus buildings still, in the Meditation House, and I’ve also spotted more than a few bumper stickers moving around town.

The imagery is a banner for peace, the brainchild of Nicholas K. Roerich.  Roerich was a Russian painter, philosopher, writer, and scientist.  He painted approximately 7000 paintings and was also the set designer for the premiere of Stravinsky’s The Rite of Spring in Paris in 1913 (famous in the history of classical music for the near-riot by the audience).

In the wake of World War I, Roerich saw the need for a treaty to protect the world’s historic monuments, as well as artistic, scientific, and educational institutions from destruction like the type that occurred in the first World War. He formulated the Roerich Pact, which called for respect of these institutions and the cultural treasures they house.  The Pact stated that these institutions were neutral in time of war and should be respected as protectors of all of humanity’s cultural property.  The Pax Cultura has been called The Red Cross of art and culture.

He also designed the Banner for Peace to fly over such institutions. The banner displays a triad (the world’s oldest universal symbol) which here symbolizes Arts, Sciences, and Religions within a circle of infinity which symbolizes the unlimited creative potential of man. 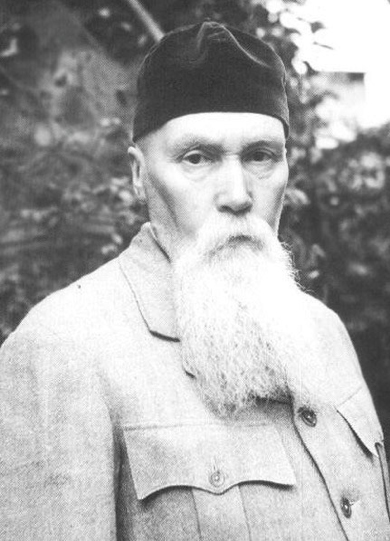 Roerich was also an advocate for peace, believing that peace and culture go hand in hand.

As an information sheet on campus says:

Wherever the Banner is displayed now, it recognizes the great achievements of the past, the present, and the future. It encourages the individual to strive to fulfill his highest potential, beautifying all aspects of life; it encourages each person to take responsibility for the evolution of the planet; it signifies the peace-builder; and it symbolizes the transformation of society.

“We are tired of destruction and negations,” Roerich wrote. “Positive creativeness is the fundamental quality of the human spirit. Let us welcome all those who, surmounting personal difficulties, casting aside petty selfishness, propel their spirits to the task of Peace-building, thus insuring a radiant future.”