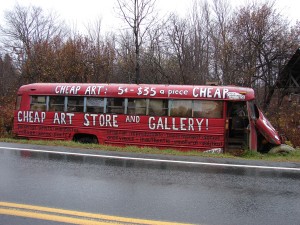 The Bread and Puppet Museum has to be seen to be believed.  None of the pictures you’ll see here can possibly do it justice, but I found myself snapping away anyway, to the point where I ran down the batteries in my camera less than halfway through the place.

Located in Glover, VT, the Museum is a 45-minute ride from the Vermont Studio Center; we organized a few carloads of residents and headed over along the backroads.  We pulled up in front of the Museum, which is for the most part a fairly nondescript barn along a small road.  I say “for the most part” because the one thing that made it stand out was the bright red bus parked across the street that has been taken off its wheels and painted to advertise its purpose as a “Cheap Art Store” (and yes, you can climb aboard and purchase some cheap art, being sure to leave money in a little box provided for the purpose).

My friend Garie looked at me and asked when Ken Kesey was supposed to show up.

A series of homemade signs pointed us in the right direction; we walked through the rain (it rains alot in Vermont these days) across the street and into the barn. We climbed the wooden steps, and emerged into the loft of the barn…and into an alternate universe. 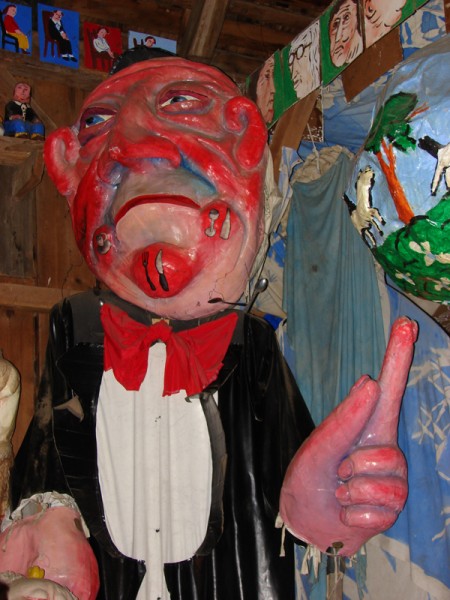 Every available inch–ceiling, rafters, walls, floors–had been turned over to the display of puppets–many of them very large–as well as other materials such as photos of the puppets in performance, bas-relief drawings, small paintings, and the occasional No Smoking sign in French. 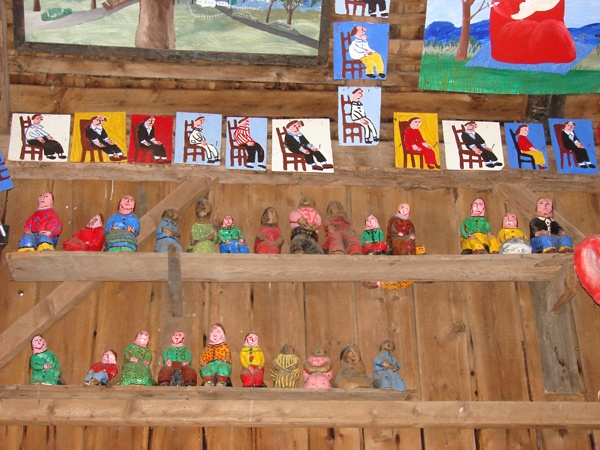 The puppets come in all sizes, from little scenes with multiple characters arranged on the ground, to large heads measuring about 20 feet across, hung flat on a wall. And then of course, there’s everything in between.

The barn is roughly divided into sections by the placement of post beams, and each section was given over more or less to one tableau-style presentation of a group of puppets from a performance. And each section had a handwritten note which described the theme, the time and place of the performance, where the puppets were constructed (surprisingly, many of them were created in various neighborhoods of New York City). Many of the puppets dated from the early 70’s. 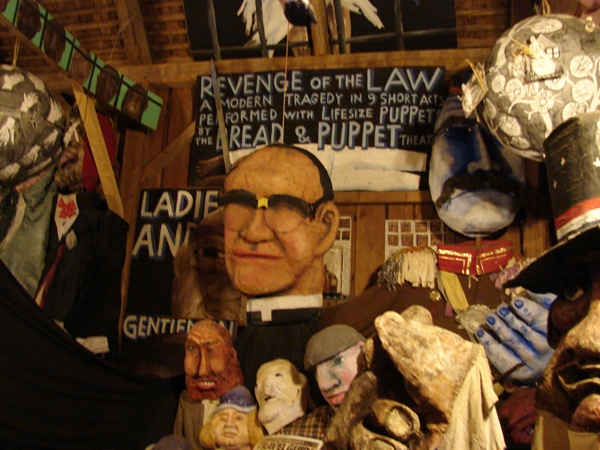 There was a tableau of garbagemen, another given over to Chinese devils, a striking blue atmospheric one, our Founding Fathers (all of them, but with Ben Franklin gaining prominence) hanging from a beam, their buckled shoes dangling in the air. There were papier-mache globes, masks, and dioramas. There was the White Horse Butcher (the horse was a sawhorse with a sheet over it), a silver-headed warrior with a sword, ghost-like figures. 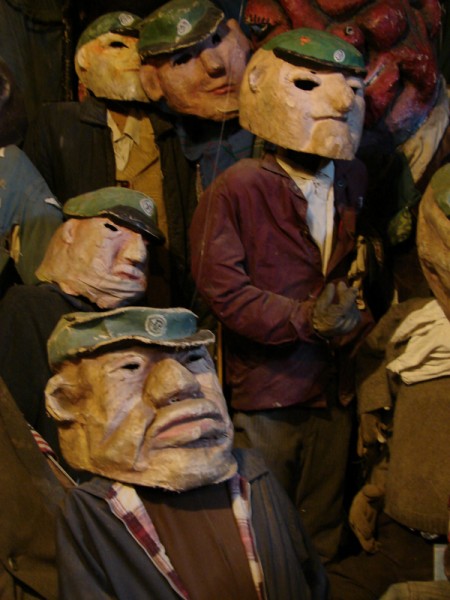 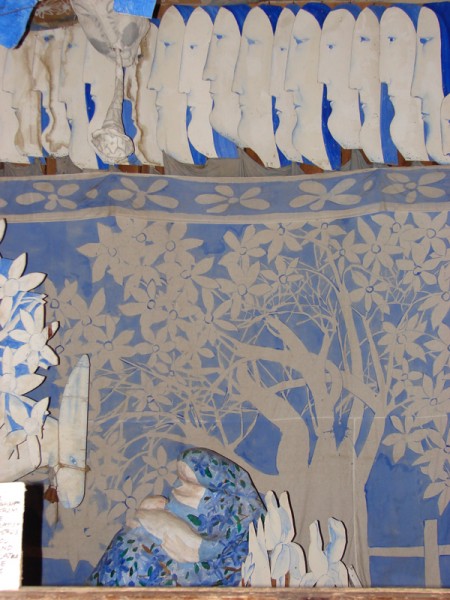 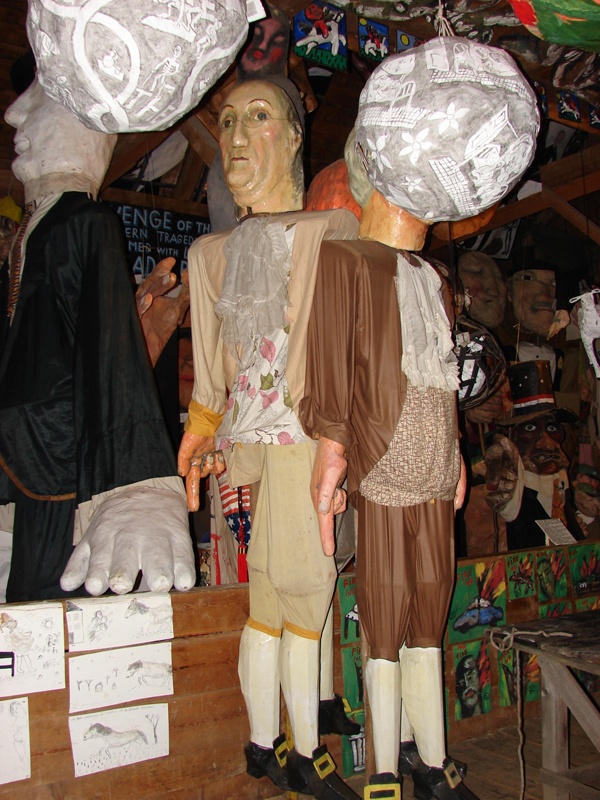 Bird-like puppets that resemble the Egyptian god Thoth. Fat faces with red pimples. Red Chinese lanterns hanging from the ceiling. A Chinese dragon on wheels, pushcart-style, made in NYC. Humorous puppets and masks, with bulbous noses and moustaches. Frightening ones. Groups that go together, and groups created only by the bunching up of singular puppets that didn’t fit anywhere else. 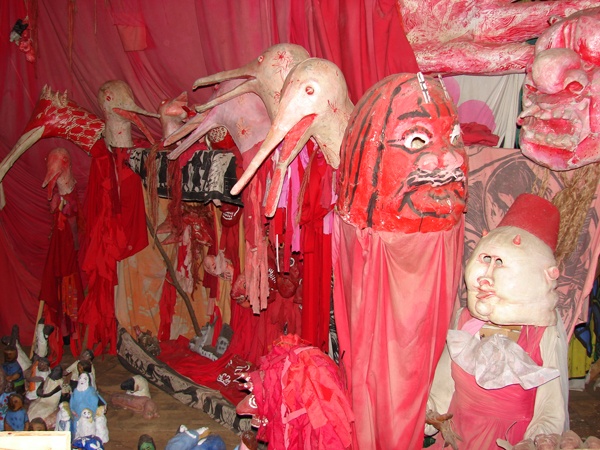 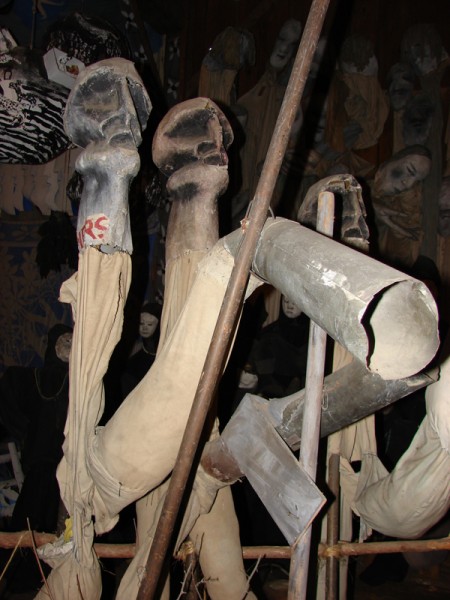 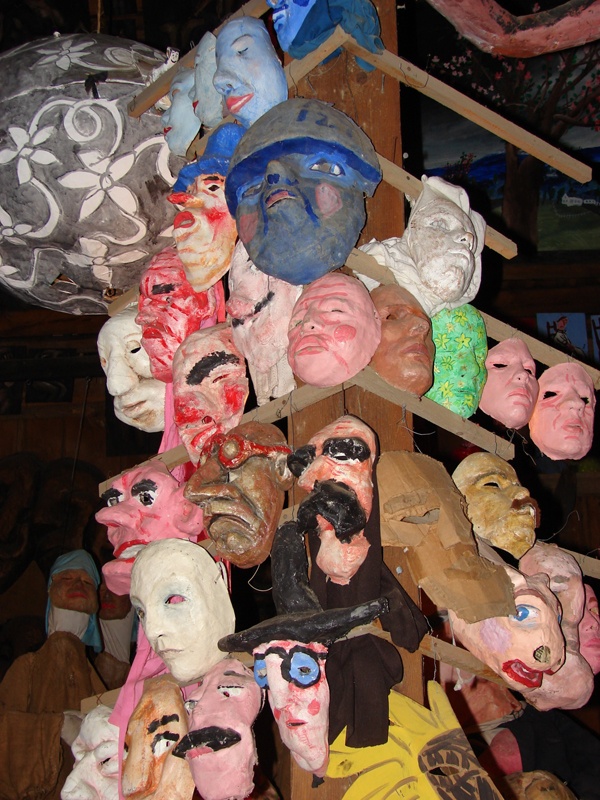 There was something quite American at work here (this absolutely must be listed in “Weird Roadside America”). But the display of politics and the emphasis on the community inherent in performance seemed to come from another place altogether. There was a display of the popular in its truest sense–of and by the people–which seemed more of the world than of America, if that makes sense. A spirit of cooperation, of being in on the joke together, of working for the common good which is not typical of the American character. And certainly, there were influences from Central and South America, Cuba, colonial America, China, and something even Germanic in the politics, inspirations, and formal qualities of the puppets. 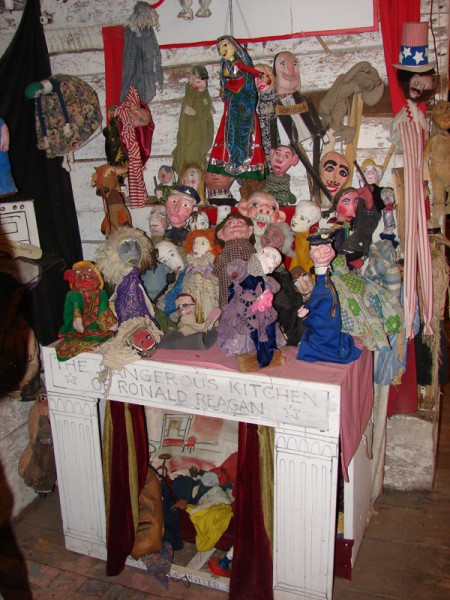 Photos of performances adorn the walls and can also be seen in several books in the gift shop. Most of the performances take place outside–probably because it’s the only place with enough room to accommodate these giant heads–and seeing the puppets among the trees give a different impression than seeing them among the barn rafters. They are impressive in both places.

The Bread and Puppet Theater Company maintains a busy schedule and continues to go on tour; just last Friday they performed a Verdi opera. The theater company provides a piece of bread with every ticket by the way, because both give sustenance.

A sense of humor is evident throughout, as is a left-leaning, 1960‘s-liberal, do-it-yourself or do-without mentality. The barn is unheated. Everything is on the honor system: visitors are asked to turn off the lights when they leave; payments for gift shop items are accepted via a designated box. Handwritten notes and signs are everywhere; some note that mice like wheat paste, and skunks like to play amongst art; others take a position against The Establishment, be that the rigged capitalist system, crooked governments, or swindling art dealers that take art out of the hands of The People.

The language, spirit, and essence brought me back to Berkeley, but there is a New England backwoods twist at work too.

The Puppet Cathedral and Dirt Floor Theater are located in a different barn out back. The floor is indeed made of packed earth. Just inside the entrance is a small music stand with instructions, as well as a large brass bell on the ground nearby:

1. Ring bell.
2. Choose text and seat, and read aloud.
3. Change seat and repeat.
4. Ring bell again.
5. Consult radio and other forms of communication to see how your performance was received by the world-at-large.

Ouch! Any artist has to feel that sting, and I wince as I write this because really, what does it matter? 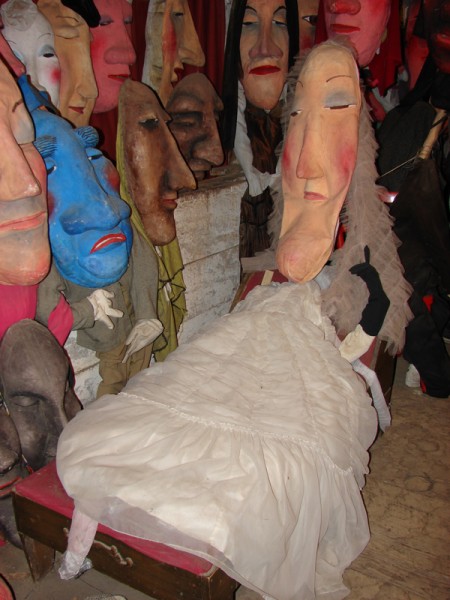 The grounds also include a printshop, which creates the work on display in the gift shop (postcards that urge “Resistance against technological oppression”, broadsides, etc). Two of us lurked outside trying to peer in the windows. The founder and printmaker, who was currently at work on some prints, took the time to go to the window to motion us around to the shop entrance, though he was too busy to pose for a photo, as he was in the midst of inking plates and printing them by hammering them with a mallet onto fabric sheets.

As I walked around the barn loft, the printshop, even the garden which was not quite an ordinary garden, I kept thinking: Wow, they’ve made it work. They have a passion, no matter how odd or impractical, which they have turned into a success. They have positioned themselves so that they can work all day on that passion. They have enough of a following that they are called on tour. They sell art. They own land. They have space to display their passion–and people travel to see it. They converted a damn bus into an art gallery.

They’ve made it work.

I feel like they’ve found the secret. It’s not the first time I’ve thought that up here.

It’s the kind of place that you can’t get out of your head.