In Which We Laugh at a Technical Difficulty While Discovering a Metaphor for Artmaking.

Last week, I attended a lecture at the Vermont Studio Center by the painter Yvonne Jacquette. (Check out this article for more info on her paintings of aerial cityscapes). 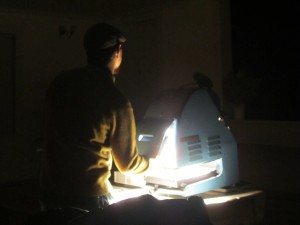 Near the end of her talk, the Powerpoint and digital projector were put away because Yvonne wanted to show us some thangka paintings which were not in digital form. The Beseler opaque projector was turned on; it provides for the projection of books and other paper items, using a series of lights and prisms to reflect the image onto the screen.

I’d never seen anything like this beast before; all told, even though it sat on a tabletop, it seemed to be bigger (certainly heavier) than anyone in the room. And it was loud, very loud. There was a door which opened from the back, like the door to a wood-burning oven, which, when opened, poured out hot light into the darkened lecture hall. There was a presentation tray underneath, made of industrial-looking metal rollers, on which the reproduction of the thangka painting was placed.

As Yvonne began to talk about the thangka, the internal fan (necessary in the face of those white-hot lamps) blew the card off its centered position on the rollers. We watched it get caught up in the blast of wind, like a leaf on the street, until it caught on the interior wall of the projector. From there, we could see the corner of the card and the metal rollers, but that was all. 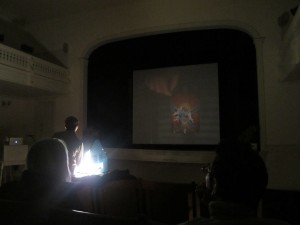 Undaunted, the projectionist opened the door and adjusted the image, then closed the door again. The image again was forcefully blown away and out of reach of the lights and prisms. We could see evidence of it, a shadow, a shape, but not the image itself.

The audience laughed at this unruly little image.

While people continued to give advice and fiddle with the Beseler, I realized that this was a great metaphor for artmaking: it’s the place where the patient, the stubborn, the curious, the diligent, and the frustrating all collide. Where sometimes you know what you want to happen, but it just won’t materialize, despite your best efforts. Although the process might seem perfectly straightforward, there’s always something that keeps running ahead of you, just out of your grasp. The fleeting image. 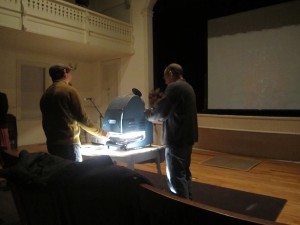 Usually when this happens in the studio, you just have to make do with something else; your hand makes adjustments to contours, position, relationships between parts. Sometimes something major needs to get covered up, or sometimes a piece is put aside entirely in favor of something new and different. These solutions, which may not be what you had in mind, usually turn out just fine in the end. (Sometimes, better than fine).

This calls to mind a Richard Diebenkorn quote:

I can never accomplish what I want – only what I would have wanted had I thought of it beforehand.

Because no one could stabilize the image in the opaque projector, Yvonne’s talk ended there. Fortunately, most of what she had wanted to say seemed to have been said already. Afterward, a small crowd gathered around the Beseler projector to marvel at its dimensions and laugh at the momentary chaos it had caused. We left the lecture hall.

I walked back to the studio, thinking about runaway images. Time to try again.