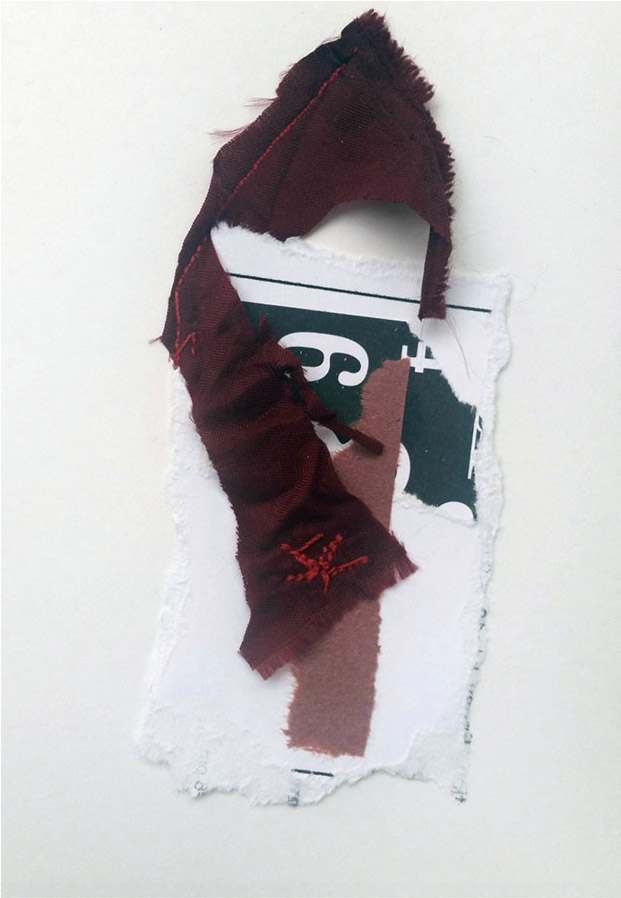 At the height of my hand injury, I was going stir crazy about not making art, not knowing when I would be able to make art, not having control with my painting hand, and not even being able to write properly. My writing looked like a child’s.

I decided to keep busy making things, in whatever way that was possible. I tried opposite-hand drawing (for me, that’s left), which is supposed to be liberating. I’ve used it as a technique in my own classes to encourage students to loosen up, yet also delight in the resulting drawing. Well, I reached the conclusion that it’s all well and good when you’re simply taking a break from your self-critical ways, but when it’s all you’ve got, it stinks. It’s fairly demoralizing, in fact. I quickly moved on from the left-handed drawings.

I tried a few other things, eventually settling on the idea of using a sewing machine to continue making mixed media works. Why a sewing machine…in college, I had occasionally used hand sewing in pieces as a repetitive, anxious, angry technique (which was echoed years later when I saw a woman embroider a protest message that said something to the effect of “I just made this so I could stab something 38,000 times”)…although hand sewing wasn’t an option due to the state of my hand . . . the feminine history of sewing appeals to me at this point in time, and I figured I didn’t need any finesse or precision to shove some things through a sewing machine. Whatever happened, happened. I think also, I felt like mending things metaphorically. I was certainly broken; the country felt broken. So I decided to sew. At this point, I couldn’t even use a pair of scissors, and didn’t trust my hand to cooperate in making new work that was good, so I found old show invitations, paintings, and pieces of this-and-that in drawers.

I needed cheering up after a pretty difficult, by any measure, year. I heard lots of people expressing the same feeling, so I decided to make cards to mark the new year with a hopeful new start.

True to my word, I began shoving things through a sewing machine I bought used in a parking lot (it was speckled in glitter). I loved the messiness and jumbles of thread that revealed themselves. I made ten or so cards and the machine stopped doing anything. I could settle for messy and jumbled, but not nothing.

I got another machine. I took a sort-of beginner’s lesson. I sort of broke the second machine, but it’s still with me. I’m still slowly making New Year’s cards, even though the worst of my injury is behind me now.

This is one of the first batch of cards. I think this one went to my kindergarten teacher, who sees me just as I am.