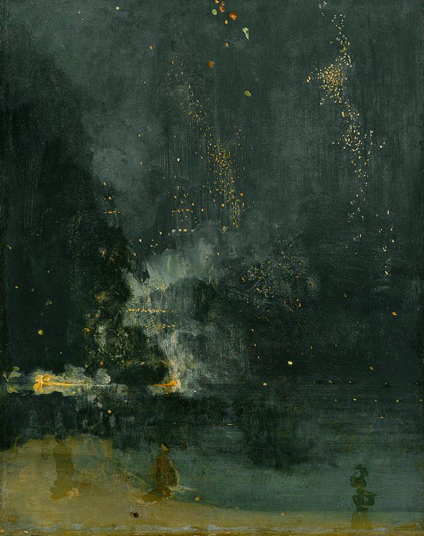 In July 1877, Ruskin writes a heavy-handed and extremely critical review of Whistler’s work in a group show, that causes Whistler to sue him for libel:

For Mr. Whistler’s own sake, no less than for the protection of the purchaser, [the founder of the Grosvenor Gallery] ought not to have admitted works into the gallery in which the ill-educated conceit of the artist so nearly approached the aspect of willful imposture. I have seen, and heard, much of Cockney impudence before now; but never expected to hear a coxcomb ask two hundred guineas for flinging a pot of paint in the public’s face.

Whistler, a sue-happy, litigious, defensive kind of guy, reads the review in the paper and takes Ruskin to court specifically for using the word “imposture”, suggesting that Whistler has willfully deceived the public. He asks for damages of £1,000 plus court costs.

Whistler appears as his own attorney and calls several artists to testify on his behalf, but none do; they are too afraid of damaging their careers. He talks a bit about his inspiration, the idea of creating a mood, the way a symphony or a musical nocturne creates an atmosphere with musical notes. A lover of bon mots, he frequently causes the gallery to break up laughing. When Ruskin’s attorney asks if Whistler’s price of 200 guineas (roughly a year’s salary for a mid-career office worker at the time) is for two days’ work, the amount of time Whistler has testified that it took him to finish the painting. Whistler replies:

No,I ask it for the knowledge I have gained in the work of a lifetime.” This is something very close to what my grad school advisor always says.

The jury returns a verdict in favor of Whistler, but awards him only a farthing (less than a penny) in damages; court costs are to be split.

This is not exactly a victory for either party, and Whistler in fact loses patrons because of the trial.

The painting in question has since taken its place in art history as a precursor to abstraction, action or drip painting, and a revolutionary use of oil paint (by thinning it to behave more like watercolor).